Catch us at The Crepe Place in Santa Cruz on Saturday, September 29. We’ll be playing with Slime Girls and French Cassettes! The show starts at 8PM and is $8 at the door. Don’t forget to get a crepe while you’re there – they’re delicious!

Also, if you’re a fan of local “have PA will travel” rockers BATTLEHOOCH, you may have been in for a surprise when their latest in a series of singles came out on September 3rd. They’ve been playing their song “Joke” for a while–even back when we met them at Maker Faire last year–but in the interim they asked Matt to do an 8-bit remix. “Joke 8-bit (Glowing Stars Remix)” is now unleashed to the world, so go check it out here! 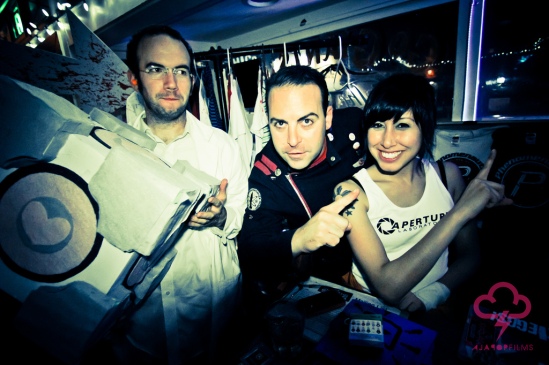 Above: Science and Honor! With Angel Nova of The Phenomenauts at The Crepe Place, Santa Cruz
Photo by AJAPOPFILMS

Our last few shows were a blast! East Bay Mini Maker Faire was a success and Matt spent most of the day teaching attendees how to mod their old Game Boys. We had an awesome lineup of chip artists from all over the Bay Area, including Doctor Popular, starpause, E.N. Cowell and A_Rival. We were also lucky to have Max Capacity and Adam Scradam return for visuals. Doc and Matt even found a bit of a break in the day-long event to hold an impromptu jam session with Nanoloop and banjo in the middle of the fairgrounds! 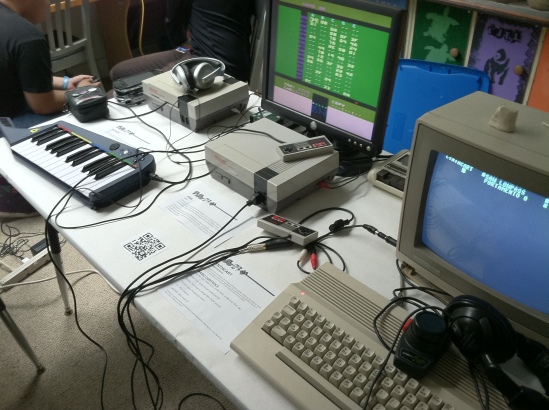 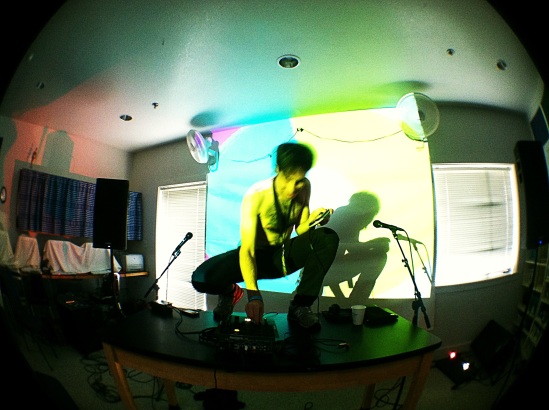 Starpause with his shirt off before noon. 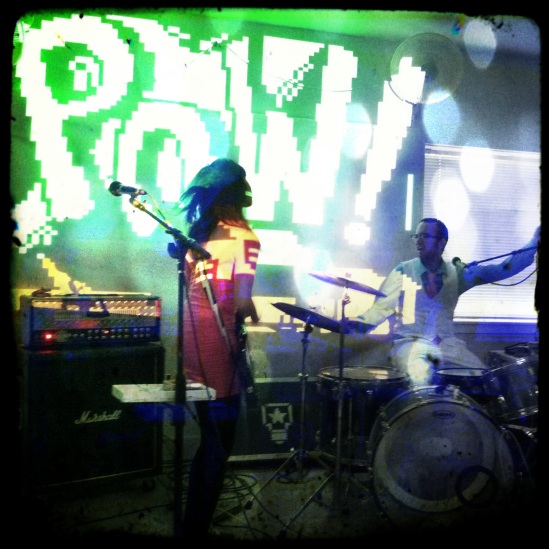 The following week, we played a really fun rock show with The Phenomenauts and The Bloodtypes at The Crepe Place in Santa Cruz. Now, we’ve played some rockin’ shows, but this one was definitely rockin’ in its own special way. I think all of the bands had amazing energy, fun outfits, and just overall knew how to put on a show. Major thanks to Grand Fanali Presents for booking this for us. Also thanks to AJAPOPFILMS for documenting the event. Matt and I dressed up as Chell and Rat Man from Portal 2. He even made a Companion Cube at the last minute out of cardboard, foam, and felt! 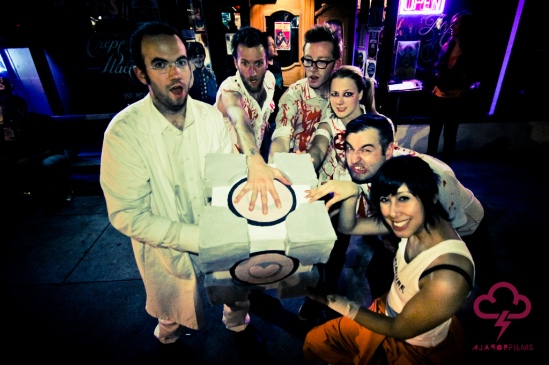 We capped off that weekend with our last show of the year at Cafe Du Nord in San Francisco with the super sexy, freakin’ funky Planet Booty, Easystreet, and Hottub DJs. It hasn’t been a month yet since our last show, and I thought we’d be able to have a nice, restful break, but things are picking up speed again.

With January coming up in less than two months, we’re finishing up our split release with Milwaukee friends Awkward Terrible. We absolutely adore those guys and can’t wait ’til they arrive in January to release this ish with us! Also on the plate is our second album, but that’s further down the line. Some of you guys were able to catch our new song at one of our last shows. We’ll be able to release some samples online soon. We’ll also have some new merch available soon, so stay tuned! Our 1-year anniversary is also coming up, and we’ll have a few special things revolving around that as well.

Our last two shows of the year are coming up next week! But before we get to that, we’ll be on The Unbound Sound Show on Wednesday, October 26 from 8 p.m.-10 p.m.! We’ll be talking up our upcoming shows and plans, playing some acoustic songs, and even debuting some new material.

Then on Friday, October 28, we’ll be playing at The Crepe Place in Santa Cruz with The Phenomenauts and The Bloodtypes!

And finally, on Saturday, October 29, we’ll be wrapping up a wonderful year with our last show of 2011 with Planet Booty at Cafe Du Nord in San Francisco! Tickets are already on sale, so make sure to pick some up if you plan to go!

We’ll be playing a new The Glowing Stars tune at these last shows!

This Wednesday we’re playing a mini set for Jonathan Mann’s 1000th Song-A-Day/Album Release Show at Red Devil Lounge in San Francisco. On top of that, we’ll be joining him during his set, accompanying his songs. Matt will do what he does best, playing multiple instruments, and Lizzie will be playing some guitar and bass on a few songs. Either way, this event is bound to be a historic one. Mann has been writing a song every day since 2009, and has also been known for his Game Jew series on YouTube and having his iPhone 4 antennae song play during an Apple keynote:

With October approaching, our show dates have been lining up. We’ve updated our Shows page with the following October dates:

It’s hard to say what will be in store for us for the rest of 2011 in terms of shows, so make sure you catch one of these! We have big plans for new music for the rest of the year, as well as a 2012 tour, so subscribe to our mailing list on the bottom right sidebar of our homepage to get those updates.

We’ve been spending our mini hiatus working on new songs and *still* waiting for Matt’s baby to be born. But we are playing in San Francisco in less than a month! If you’re in the area, catch us for FREE SHOW on Sunday, September 4. We’re playing Convergence Festival at the Japantown Peace Plaza at 12 p.m. For more details, check out our Shows page, or view the Facebook Event page here: http://www.facebook.com/event.php?eid=256156604397453

And remember that time we worked on a song for Jonathan Mann’s Song-A-Day: The Album project? On our Quest Coast Tour, we took over his livestream and recorded parts with crashfaster on Jon’s Song-A-Day #905: The Only Way I Know How. On September 28, Jonathan Mann will be having his 1000th Song-A-Day Song and Album Release Show at Red Devil Lounge in San Francisco. We’ll be playing with him live! It’s bound to be a crazy event, so don’t miss out. Check out the video for the song we did with him below:

Lastly, excited to announce that we’ll be playing a show in October opening for The Phenomenauts and The Bloodtypes! This will be at The Crepe Place in Santa Cruz. More info on that as the date nears.

Thanks again for everyone’s patience with receiving the limited edition physical EPs for Anything Past That. It seems as though international orders have started to make their way to their rightful owners. We’ve received some e-mails from people who haven’t gotten their orders yet and we’re doing our best to resolve them ASAP.

For those who missed out on pre-ordering a limited edition EP, we’ll have a small number of them for sale at PAX Prime 2011, which is in two weeks! Lizzie will be doing a set with crashfaster at Jamspace on Saturday, August 27. Follow us on Twitter and Facebook to find out how to get one.