Our limited 7″ vinyl split “In Flames / Shotgun” is available now! We teamed up with Crashfaster to release two songs bringing the melodic 8-bit sounds of the Game Boy to the lovelorn, just in time for Valentine’s Day.

You can purchase the vinyl on our Bandcamp at http://theglowingstars.bandcamp.com for $15 + shipping, or download the tracks for FREE! The much anticipated Crashfaster / The Glowing Stars limited split 7″ vinyl is finally here! On one side is crashfaster’s newest track “In Flames,” and on the other side will be “Shotgun” by yours truly. The vinyl is extremely limited as only 250 were made, and the vinyl colors are random. The album will be available on Thursday, February 14, 2013 on both the Crashfaster Bandcamp site and The Glowing Stars Bandcamp site for $15 (+$5 shipping in the US). The song will be FREE to download, and will include an LSDJ .sav file of all of our songs for our fellow chiptuners to enjoy.

If you pre-ordered the album, you should be receiving a shipping confirmation next week. Your order will arrive autographed by all members of both Crashfaster and The Glowing Stars.

You can also get the album early this weekend at Rockage 2.0 in San Jose, CA! Crashfaster and Matthew Joseph Payne will be performing and selling the albums. See below for the full schedule:

Thanks again to everyone for the support. We’re especially excited about releasing this last song with our good friends Crashfaster who have been with us every step of the way!

What a wild ride! Sorry it’s taken us so long to say anything, we’ve been recovering, then recovering again from Thanksgiving dinner…

Immediate thanks are in order to the DNA Lounge, Crashfaster, Judgement Day, The Phenomenauts, and our fabulous horn section made up of Dustin, Jorge and Andy.

Big thanks also to the fabulous documentarians who filmed the show in various ways. There’s more to come, but for the moment we have these two galleries to offer you:

We’ve got a lot more thank yous to give, and of course the vinyl split single with Crashfaster is yet to come, but for the moment we have just one other piece of business: You can now buy t-shirts, USB flash drive cartridges and posters of the final show flyer at the merch section of our Bandcamp! Check it out: http://theglowingstars.bandcamp.com/merch

Keep in mind that t-shirts and USB carts are VERY limited, and there are already no t-shirts in small. Once they’re gone, they’re gone! If you want to buy anything as a Christmas gift, we should be able to ship domestic orders in time if you order soon, so don’t delay!

Oh P.S. – I’ve got a bunch of cool things on the horizon as Matthew Joseph Payne! If you haven’t already, come like me on Facebook. There’ll be some new, free music posted very soon…

It’s almost here. For some, this will be their first The Glowing Stars show and their last. For others, this may be their second time seeing us, or their sixteenth. Some people are even flying in from other cities, states and even the other side of the country!

Wherever you’re coming from, we’re forever grateful for your support and look forward to rocking out with you on this final show tomorrow at 8 p.m. Advance tickets are still available at http://www.dnalounge.com/calendar/2012/11-08.html , or you can get your tickets at the door for $3 more.

You can also RSVP on Facebook here, to let your friends know you’re attending the most ass-kicking farewell show of the year! https://www.facebook.com/events/408973905833583/

See you all tomorrow night!

Hey Internet! We’ll be playing a sweet mini-show on Twitch.tv for Week in Geek’s “Bloops and Bleeps” show. Tune in today at 5 p.m. Pacific Time at http://twitch.tv/weekingeek . There’ll be an interview and those in the livechat can also ask questions! Just don’t ask Lizzie if she’ll be getting Halo 4 because that’s a stupid question. 😉

For those in San Francisco, you can attend the show for free at Ocean Beach Studio, 1730 Great Highway at 4 p.m.!

Facebook Event: The Glowing Stars on Bloops and Bleeps

We’re completely honored to be playing our last show on November 8 where it all began: at DNA Lounge in San Francisco. But we’re even more honored to be sharing the stage with The Phenomenauts, Judgement Day and crashfaster! Come out and party with us at the geekiest show of the year! Here are the full details below:

You can already purchase advance tickets on the DNA Lounge website. Also check out the event on Facebook!

Oh, you can also download Horchata for FREE today. 🙂

Catch us at The Crepe Place in Santa Cruz on Saturday, September 29. We’ll be playing with Slime Girls and French Cassettes! The show starts at 8PM and is $8 at the door. Don’t forget to get a crepe while you’re there – they’re delicious!

Also, if you’re a fan of local “have PA will travel” rockers BATTLEHOOCH, you may have been in for a surprise when their latest in a series of singles came out on September 3rd. They’ve been playing their song “Joke” for a while–even back when we met them at Maker Faire last year–but in the interim they asked Matt to do an 8-bit remix. “Joke 8-bit (Glowing Stars Remix)” is now unleashed to the world, so go check it out here! 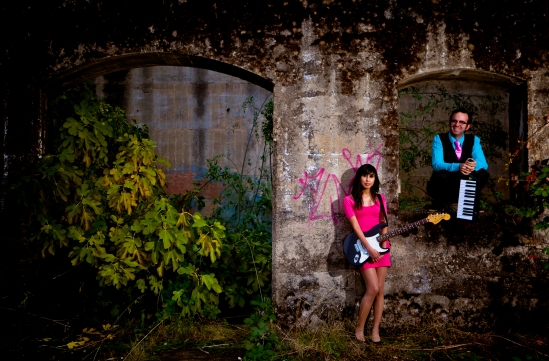 We played the Convergence MMXII/J-Pop Summit earlier today with a three-piece horn section and, as always, had a ton of fun. Major thanks to the people who run the show! And thanks to all to those who came out. If you stuck around ’til the end, you probably heard that that was our second-to-last San Francisco show and that our last show will ultimately be on Thursday, November 8 at the DNA Lounge.

We can’t even put into words how amazing the last two years have been. This band has taken us so many places we never expected, and introduced us to some of the coolest people on the planet. We’ll save the sap for our last post, especially since there is still quite a few rock left in us until November 8th! Here are our complete list of upcoming shows until it’s officially over:

If you like us even a little bit, we strongly encourage you to attend our last show at the DNA Lounge. We’ll announce the specifics soon, but with this dream lineup, it’s going to be one hell of a party. And because it’s the DNA Lounge, those not in San Francisco will be able to watch the livestream online.

Thanks again to everyone who has supported us, whether it was by coming out to our shows, downloading our music, buying our stuff, making us cool things, or offering us shows. See you at the next one!

Lizzie and Matt
The Glowing Stars 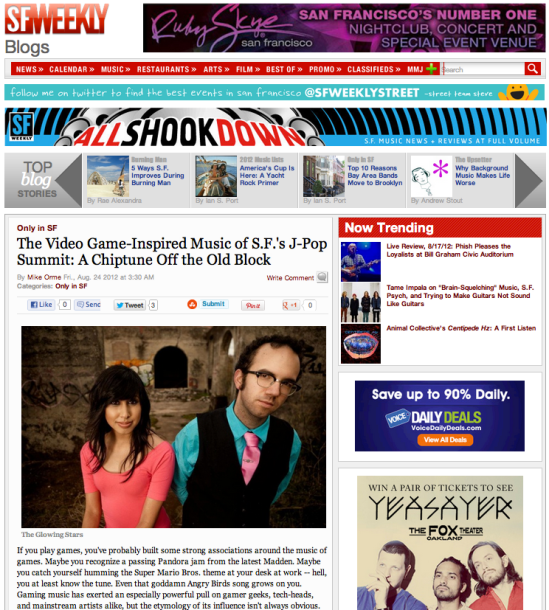 If you’re in San Francisco this weekend, be sure to check out Convergence MMXII and the Fourth Annual J-Pop Summit at Japantown Peace Plaza. We’ll be playing a free show right outside at noon! SF Weekly’s music blog All Shook Down wrote a cool article about it today titled “The Video Game-Inspired Music of S.F.’s J-Pop Summit: A Chiptune Off the Old Block.”

This is our last local show for a while, and the last show before we kick off our mini Northwest tour with crashfaster, minusbaby and more! First, we’ll be hitting up Slabtown in Portland, OR and playing with awesome Portland punk rock band The Bloodtypes on Wednesday, August 29. Then on Thursday, August 30, we’ll be playing a pre-PAX showcase at Funhouse in Seattle with Danimal Cannon, Freaky DNA and more!

For tickets, showtimes and more information, head on over to our Shows page!

See you at the shows. xoxo 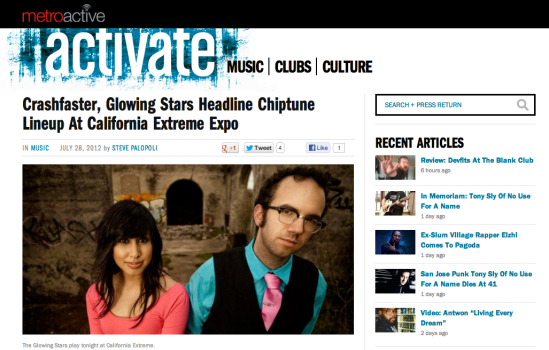 Sharing the stage at California Extreme in Santa Clara last weekend with crashfaster, Slime Girls, Doctor Popular and more was an honor. Thanks to everyone who came out! We also announced our upcoming split single on vinyl with crashfaster. More details on that to come.

Our next show will be on Saturday, August 25 at the Japantown Peace Plaza in San Francisco. We will be playing at the J-Pop Summit/Convergence MMXII Festival. It’s a free show, so if you’re in the area, drop on by! For more information, visit our Shows page, or go to http://www.j-pop.com/2012/the-glowing-stars/

Last, but definitely not least, we’re happy to announce our pre-PAX Prime 2012 NW mini-tour with crashfaster and minusbaby. We’ll be playing in Portland, OR and Seattle, WA. Check out the dates below:

See you at the shows!